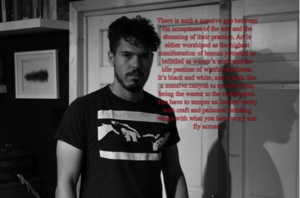 There is such a massive gap between the acceptance of the arts and the shunning of their practice. Art is either worshiped as the highest manifestation of human potential or belittled as waster’s work and the idle pastime of wistful deadbeats. It’s black and white, and it feels like a massive canyon to cross over from being the waster to the worshipped. You have to temper an Icarian vanity with craft and patience; building wings with what you have to try and fly across.

But I like Extremes. I like BLACK AND WHITE can you tell. And the prospect of the risk and the reward lights flame in my soul and invigorates me to begin crafting my own wings. But, as I’ve referenced before with a similar analogy in another post, even though the canyon is wide and intimidating, the truth is there are no mortal consequences of falling into it. You can just climb out and try again, better educated on the process and refined for the next trial. TIME TO FLY !