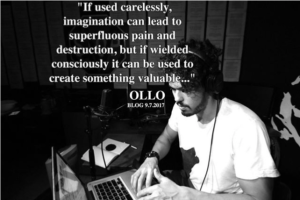 I learned an interesting term recently.
Reification: making something real, bringing something into being, or making something concrete.
The context I learned it in was psychological.
So a patient comes to a doctor with a symptom, and the doctor guesses its a symptom of depression and diagnoses he patient with depression. The patient begins to fill in the grander outline of that diagnosis over time, telling them selves the diagnosis they were given is valid and explains their symptom, then they begin imagining, then noticing even more symptoms to fit the mold of the diagnosis. And then in reality, after some time, the patient is now the perfect example of someone with depression and all of its symptoms rather than just one that could have been brushed off as a symptom of something else. They brought them into being, reified them. They believed they had the diagnosis, learned the symptoms and reified the affliction. Like paper towns. An imaginary city drawn in on a map, that enough people see, believe is there, then sure enough Someone goes and founds the town, bringing it into reality; reifying it.
It seems to be an innate and powerful trait of human nature to fill in the gaps of the unknown. Imagination, If used carelessly can lead to superfluous pain and destruction, but if wielded consciously it can be used to create, see the good and lead to positive reification of it.